Do you want to learn more about Niagara Falls? This webpage you will learn interesting facts and things that will surprise you.
By: McKenzie

Who were the daredevils of Niagara Falls?

Although Bobby Leach was not famous for his jump over the Falls
he  still survived jumping over the Falls in a steel barrel breaking both knee
caps and his jaw. A few years later touring in New Zealand he slipped on an
orange peel and unfortunately
died!
Annie Taylor was the first ever to go over the Falls in a
barrel. She climbed into the barrel and the air pressure was compressed with a
bicycle pump.
Nik Wallenda just last year went over the Falls standing on a 2
inch wide tightrope and successfully he crossed the Falls 1,800 feet across.
While  crossing he was under a lot of pressure especially because of the cameras
pointing directly at him. 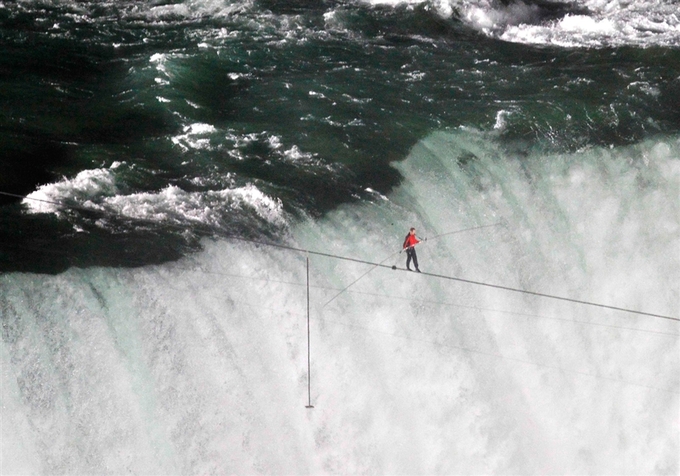 How were the falls created and how old are they?

During the next 12,000 years all of the glaciers have dissolved
and have caused huge rapids of water. The melted glaciers made their way to the
Great Lakes and down to the Niagara River then turned on the curve and now
Niagara Falls is on the border of Canada and New York.
Niagara Falls has three different waterfall that connect it,
Horseshoe Falls, American Falls and Bridal Veil Falls the American and Bridal
Veil Falls are 180 feet (ft) high and 1000 ft. wide. The Horseshoe Falls are
over 160 ft high and 2500 ft wide some of these Falls are on Canadian
territory.