Do you want to know all about dodgeball? Go to this web to get some more information.
By:Stephen 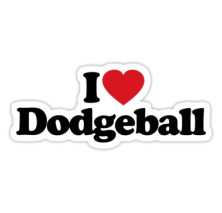 I don’t think there is an actual reason for why dodge ball was
invented. But I do know that it wasn’t to be thought out. It just happened
starting out by throwing rocks at cavemen in the dinosaur periods.

Dodgeball is a game that has been
around since 4000 B.C. It was originally played by Chinamen who instead of a
ball, threw severed heads. Thankfully, the game has evolved and in 1833
Augustus Hagerson modernized Dodgeball and made it the game.

How do you play dodge ball?

You would split up into 2 groups. Make sure you check if each
team  has the same number as the other.

While getting ready to throw, stay crouched low to the ground and
start to sort of gallop towards the line that divides the two sides. This will
help you gain power for the throw. If they throw a ball at you while going
towards the middle line, crouching and running up to the line will help you
dodge it because you are ready to move quickly and you will be a smaller target.
This will make it harder for them to hit your body and when they throw it, it
will be towards your head and therefore easier to dodge because instead of
moving your whole body you will just have to move your head. And, also, in some
games of dodgeball, throwing at the head doesn't count!

What is the equipment for dodge ball?

All you need is dodgeballs to play the game.